In arid Botswana, a bevvy of Baobabs stand sentinel over an ancient inland sea. Now void of water for most of the year, these rugged trees owe their notoriety to a watercolour painting some 160 years old.
Written by Melanie van Zyl
30 October 2020

Baines’ Baobabs rise as beacons in the Makgadikgadi Salt Pans, giants encircled by kilometres of sheer, flat and boundless space. These magnificent succulents (for that is what they technically are) have always enticed adventurers, but what’s so special about these botanical beasts? 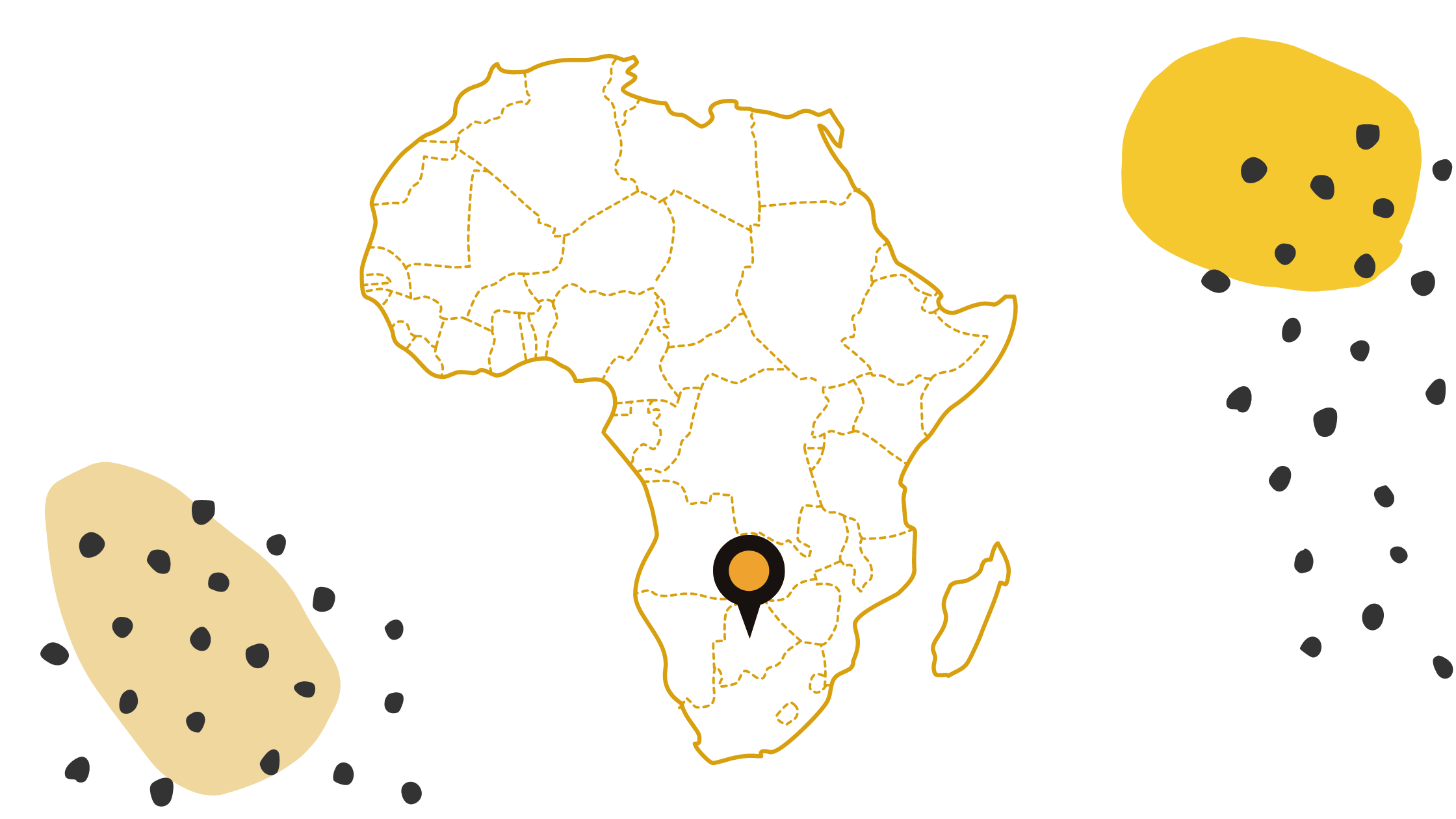 The story of salt, a sea and lonely trees

An ivory-coloured expanse, the Makgadikgadi Salt Pans encrust the northern reaches of the Kalahari Desert in an immensity so vast that it’s possible to see them from outer space. (Just ask Nasa astronaut Doug Hurley, who captured the landscape while floating above us in the International Space Station). 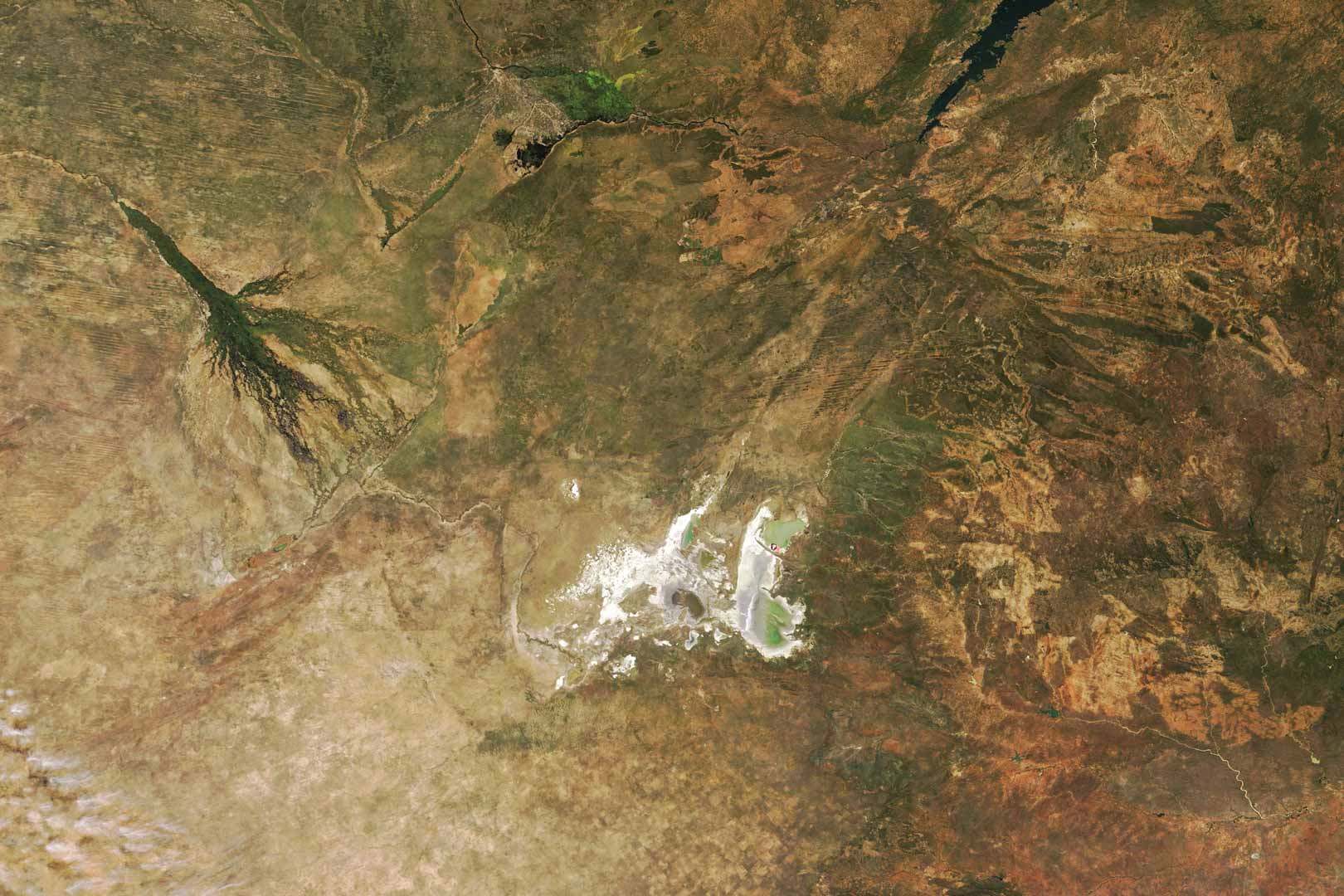 Botswana’s salt pans are so positively monstrous that they dwarf the country of Belgium and hold record as the world’s largest salt pan landscape. Why do they sprawl so broadly? Because these flats once held water. The rivers that feed the Okavango Delta today – a prolific spring originating in Angola before meandering thousands of kilometres south – once spilt across these sands creating an ancient lake.

The UNESCO World Heritage Convention affirms that the Makgadikgadi was historically one of the largest inland seas in the world and covered over 27500 square kilometres. 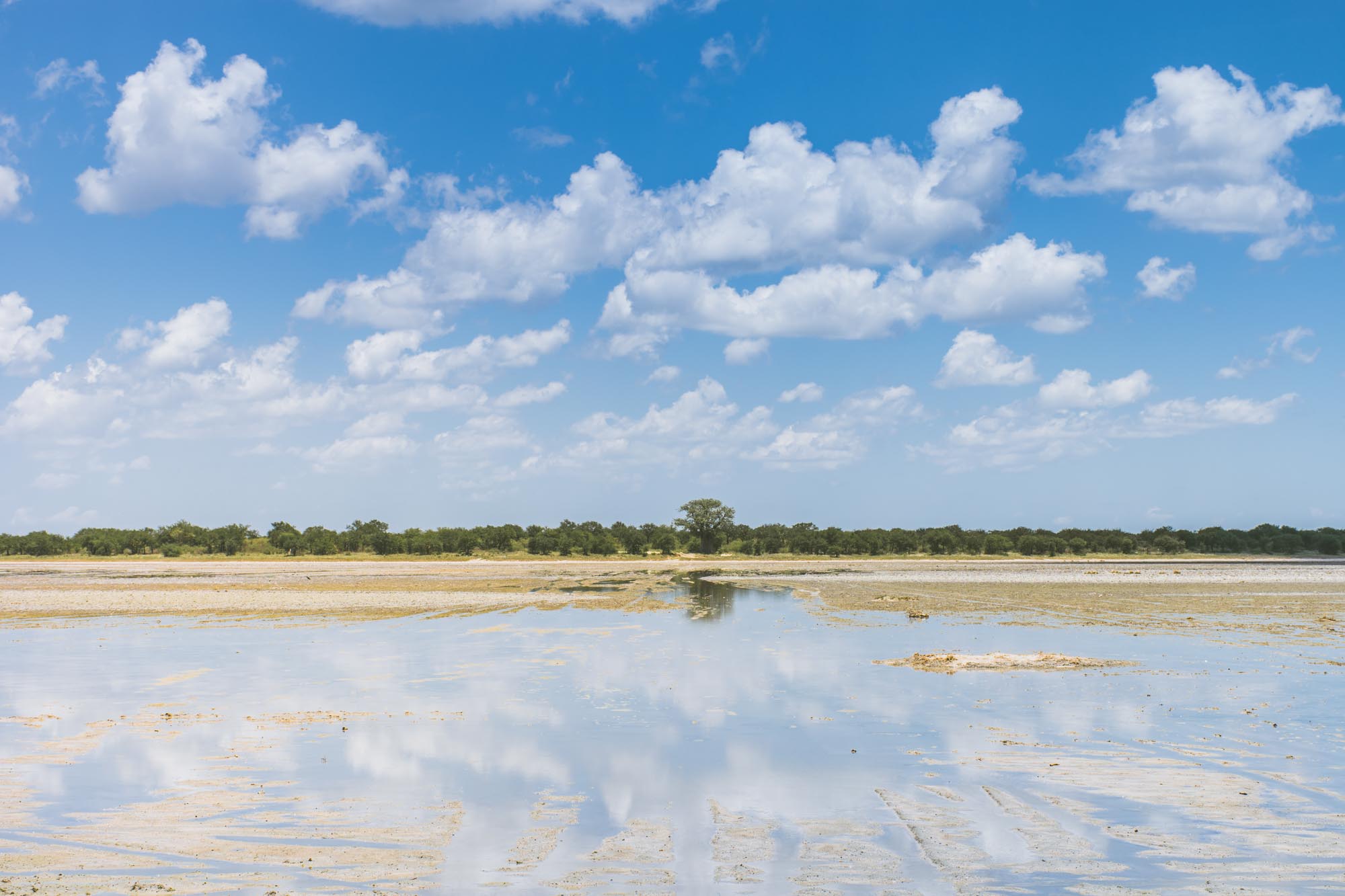 However, fragments of the sea do reappear. Shallow pans brim with waters during the rainy season and the ephemeral ponds grant us a glimpse back in time.

The enormity of the Makgadikgadi is what brought fame to Baines’ Baobabs. In such tremendously desolate landscapes, towering baobab trees stand conspicuous, beckoning across the hostile Kalahari. Their ample bellies offer shelter from the unrelenting heat, and out here they occur in clusters that form island sanctuaries. 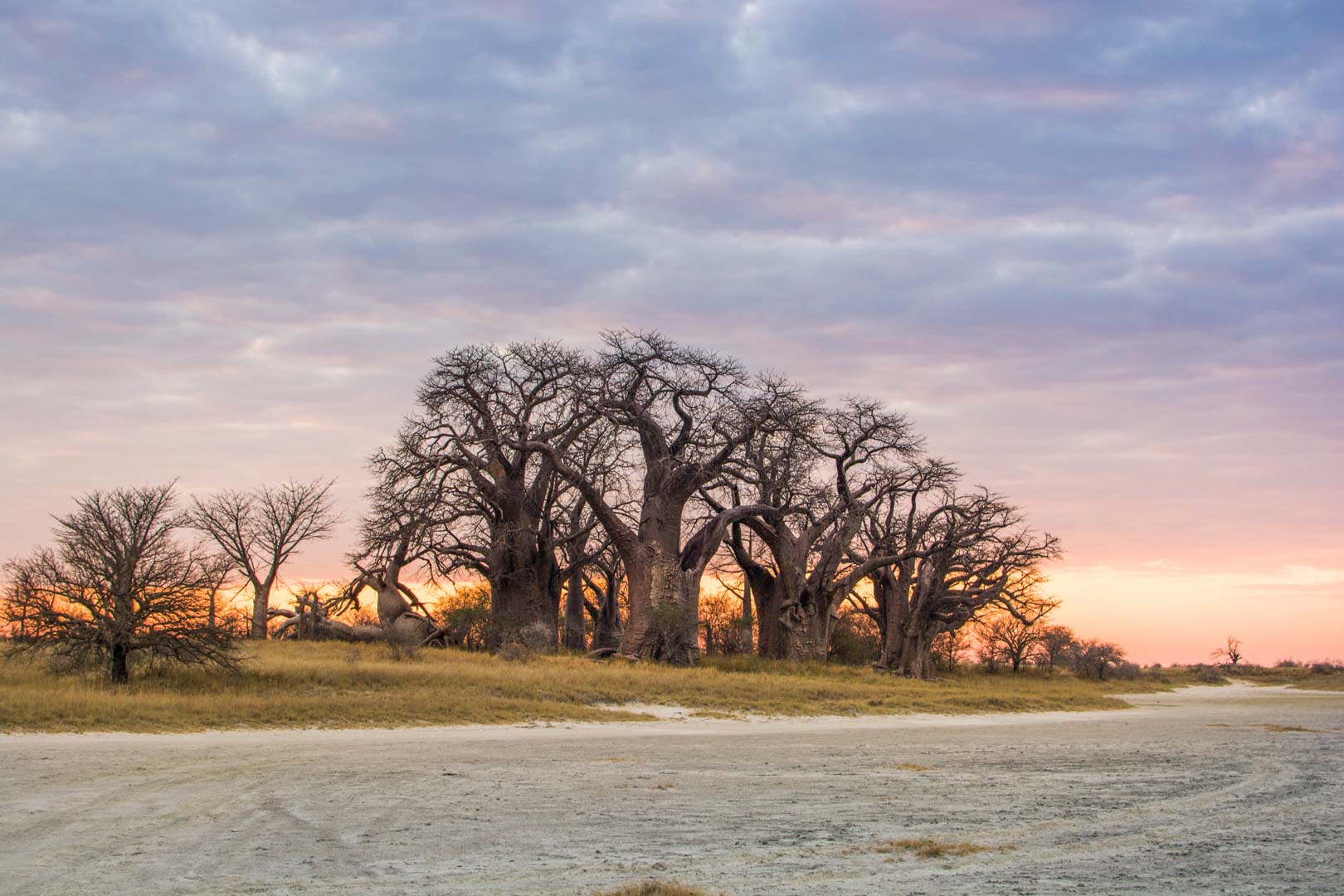 People have savoured this landscape for millennia.

A recent study of mitochondrial DNA stated that the mother of all modern humans was Motswana, originating in northern Botswana 200000 years ago – and so Makgadikgadi staked its spot as the birthplace of humankind.

Although the claim remains disputed, the Makgadikgadi Pans unequivocally bear evidence of ancient human habitation dating from the Early Stone Age. Low stone walls also remain today at sites, such as the Mma Kgama and Tlapana ruins, that date between AD1200 and 1450. Kubu Island also bears such relics. These settlements on the eastern edges of the pans marked the furthest reaches of the Great Zimbabwe state. Then, in the late 19th century, Europeans commenced exploration across Bechuanaland (as Botswana was then known). Baobab trees became signposts for early missionaries, hunters and intrepid traders that crisscrossed the region.

The Latin name for Southern Africa’s baobabs is Adansonia digitata, which refers to the fingerlike foliage that unfurls from the tips of its scraggly branches in summer. Each frond bears five leaves. Digitata is also how Baines’ Baobabs got its name, for it was the fingers and artistry of one Thomas Baines that fixed them to history’s pages. 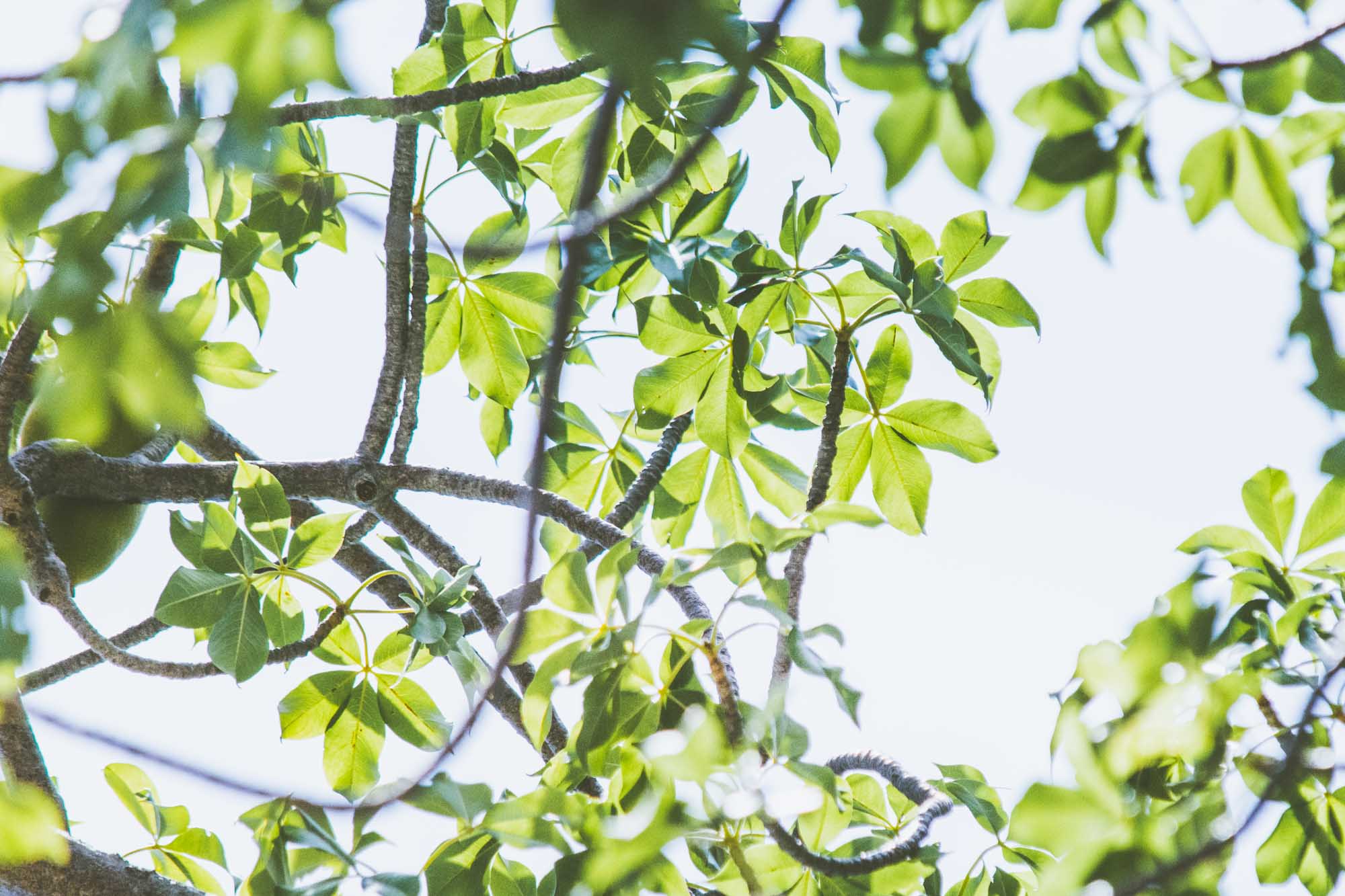 Thomas Baines was a British landscape painter who initially travelled South Africa as an artist of war during the 1850s. After depicting the battles of Bloemfontein, he turned to the serenity of nature, capturing Southern Africa’s wilderness in watercolour.

Baines went on to gain respect as an accomplished artist, naturalist and cartographer, and his work proved so popular that the Royal Geographic Society commissioned him to accompany David Livingstone on a second expedition to the Zambezi River in 1858. However, things turned sour (or, by many historical accounts, David’s brother Charles Livingstone did) and Baines was dismissed for ‘pilfering’ then banished back to Cape Town.

Not one to remain idle, Baines promptly joined another iconic pioneer, the hunter, cattle and ivory trader James Chapman. Together, they undertook an expedition to South West Africa, known today as Namibia, and further to Victoria Falls.

Leaving South Africa in the 1860s, the crew navigated their way north by ox wagon before making the slow journey from the Namib Desert towards mighty Mosi oa Tunya. Crossing the Kalahari, the contingent paused to establish camp below a clump of seven broody baobabs. 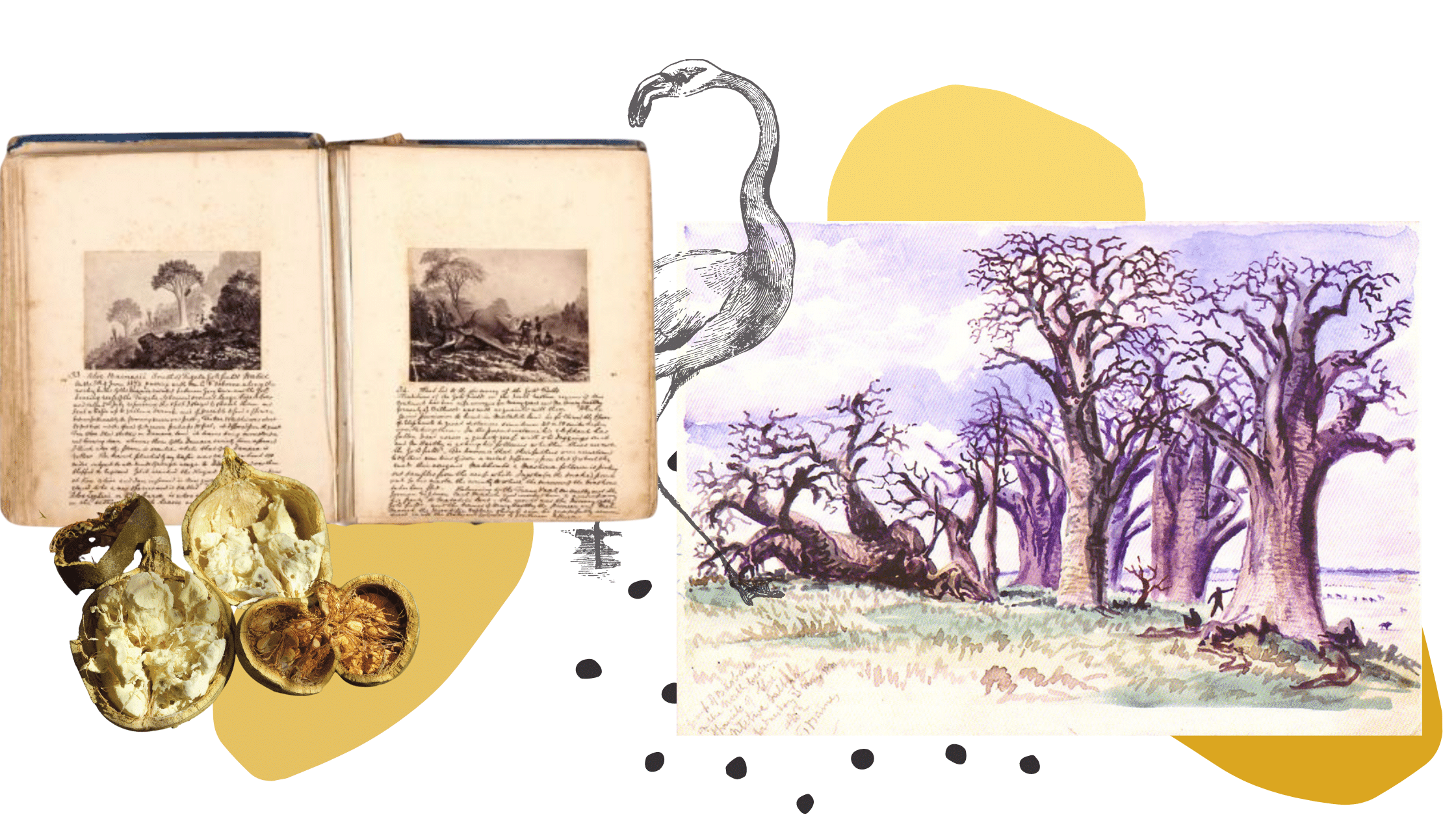 Baines immortalised the setting in a watercolour signing it, ‘A group of Baobab trees on the north west spruit of the Mtwetwe pans, May 1862‘. Today, the painting lives in England’s archives, but the trees still bear the artist’s name.

Where exactly are Baines’ Baobabs? 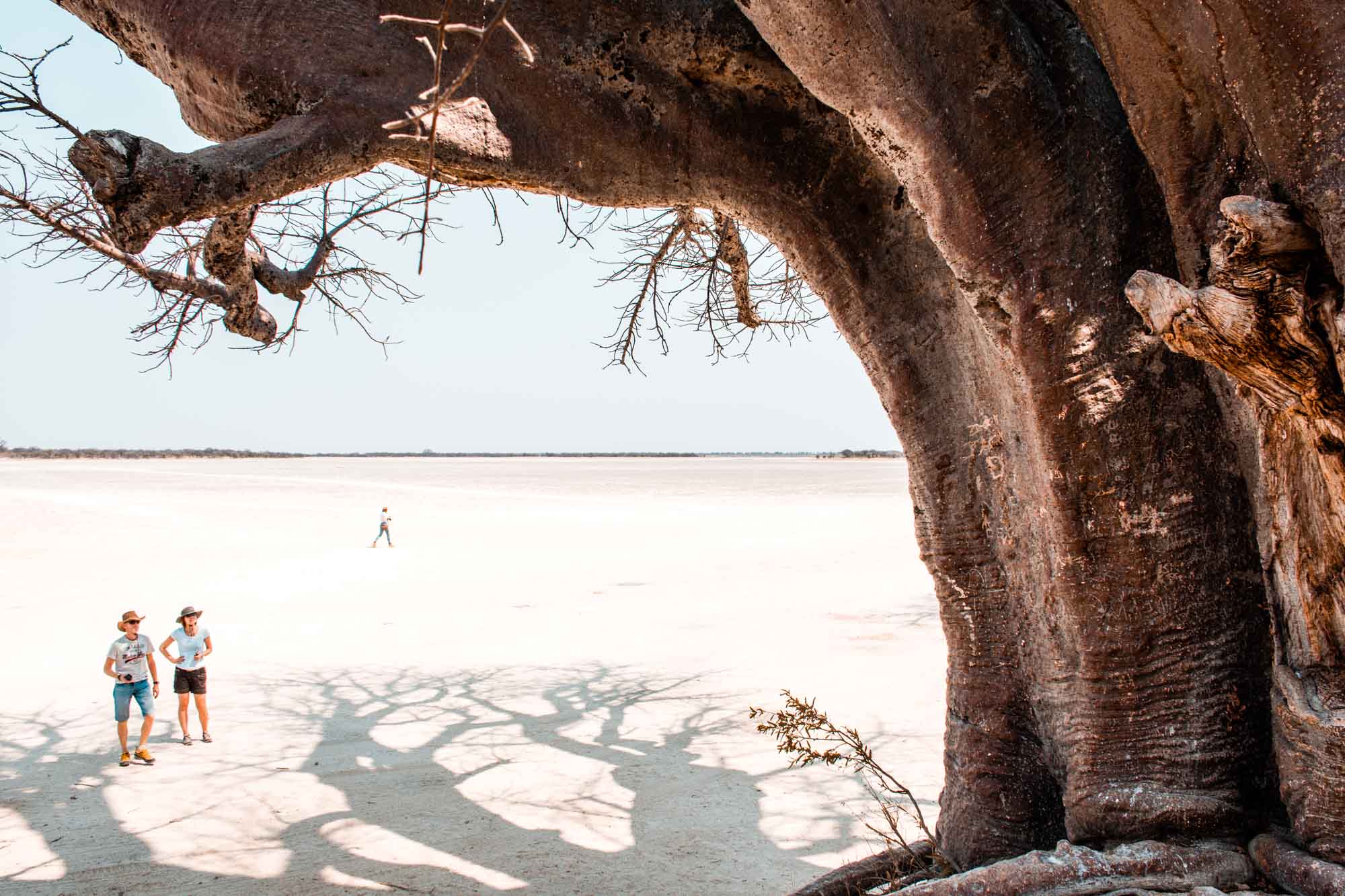 Sowa Pan, in the east, is famed for its prolific birdlife. When filled with water, it hosts migrant flocks of flamingoes, pelicans and a broad array of other wetland species. Then there’s Ntwetwe Pan, the biggest of the of three pans, which occupies the west and is partially protected by the Makgadikgadi Pans National Park.

Nxai Pan forms the northernmost boundary of the Makgadikgadi Pans system and lies northwest of Ntwetwe. Nxai Pan National Park was declared just 50 years ago to protect the unusual ecosystem and was extended in 1992 to include Baines’ Baobabs. 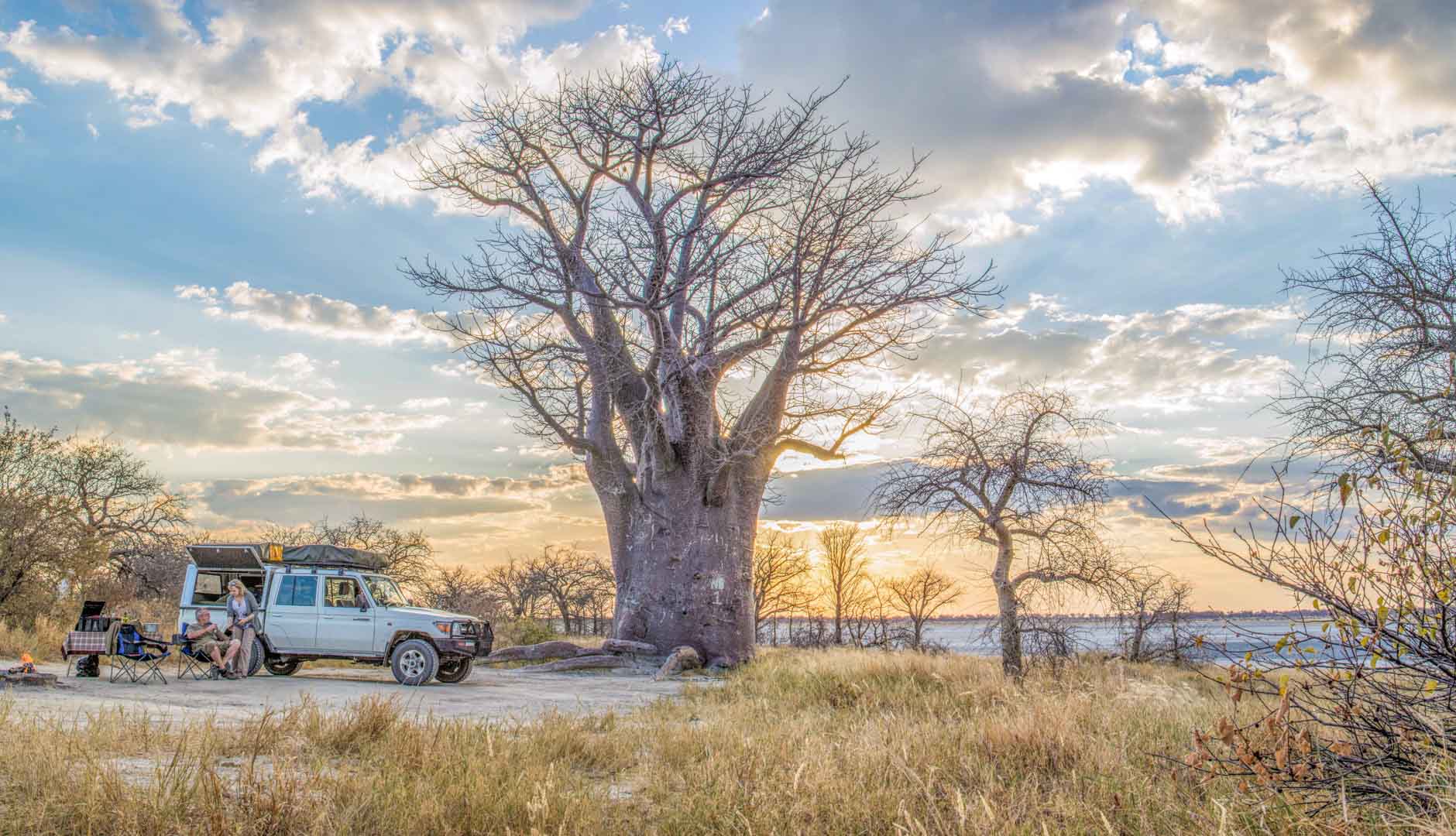 Like Baines, Chapman and their crew, it remains something of a pilgrimage to behold these baobabs today. Although not far distance-wise, sandy, corrugated road routes and the necessity of a 4WD vehicle have preserved this remote outpost. 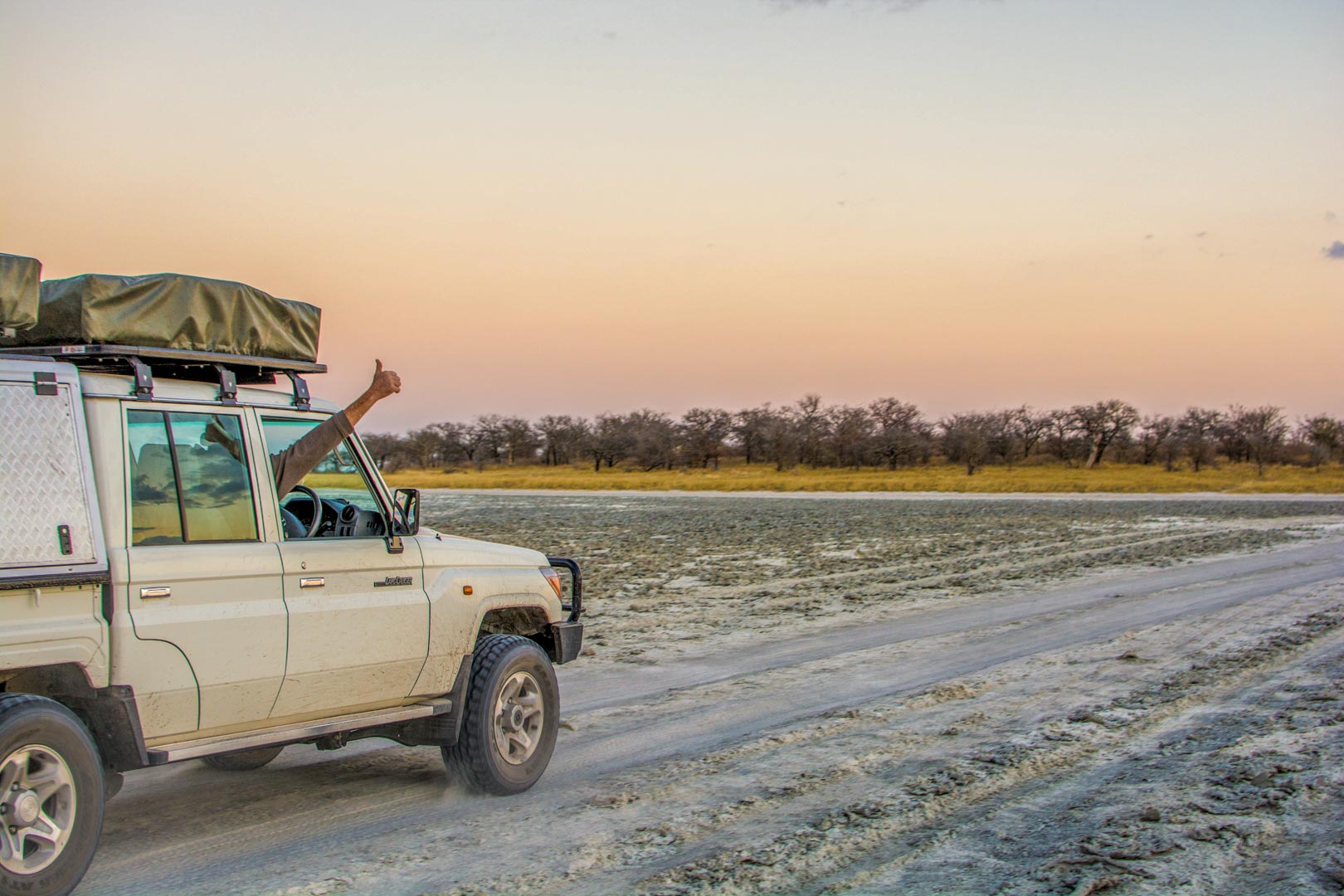 Little has changed in the century and a half since Baines’ laid brush to canvas. The ‘upside-down trees’ still reach for the stars in the same twisting contours, and one can easily imagine the relief those early explorers felt on reaching their seductive shade. Perched on the edge of Kudiakam Pan, Baines’ Baobabs remains a tranquil oasis. 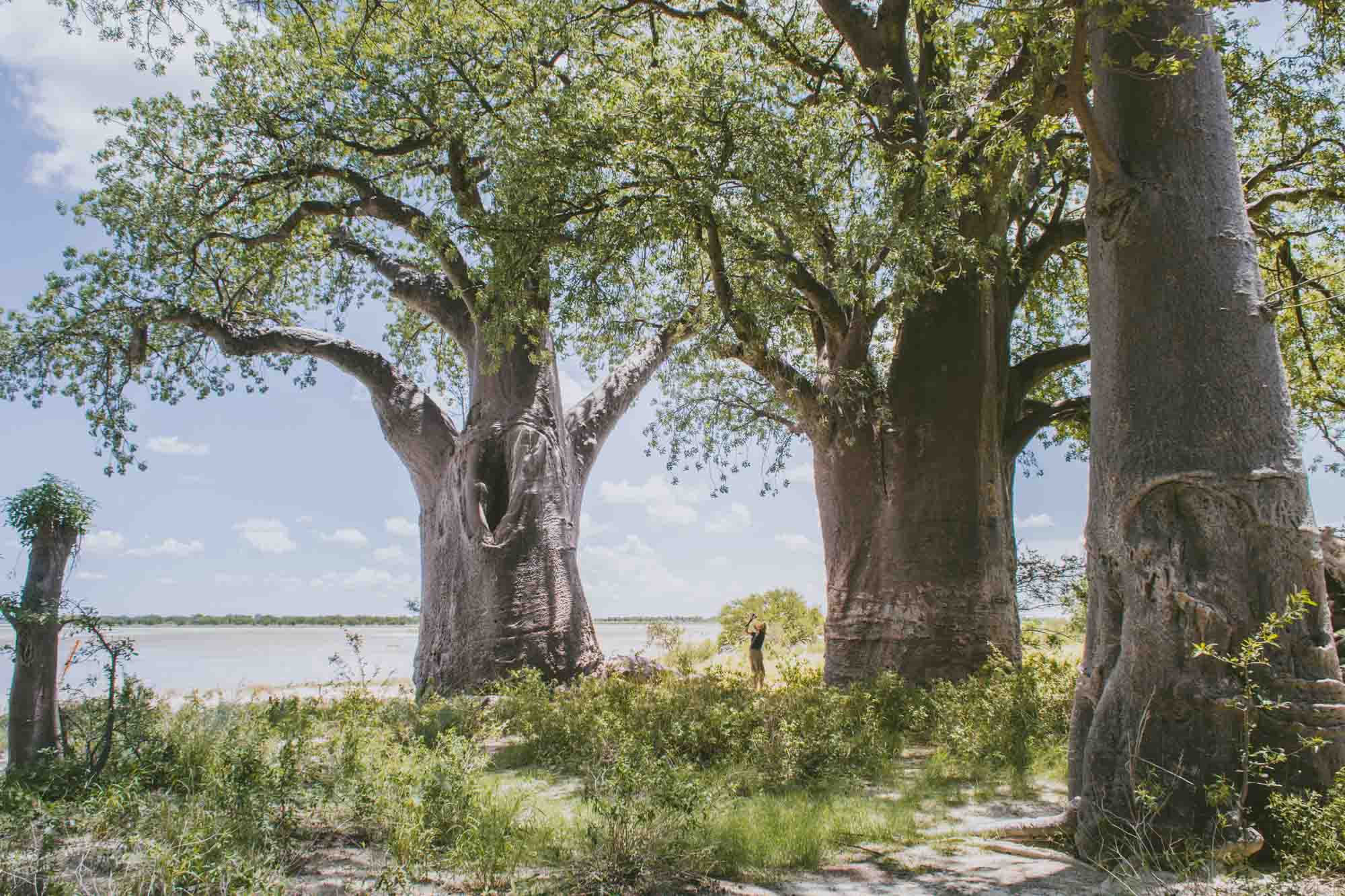 The group of trees is also known as the ‘Sleeping Sisters’. Perhaps because one of the seven baobabs lies on its side, but continues to survive, sending out shoots and fruits. Indeed, it has done so for over a century, according to Baines’ composition. 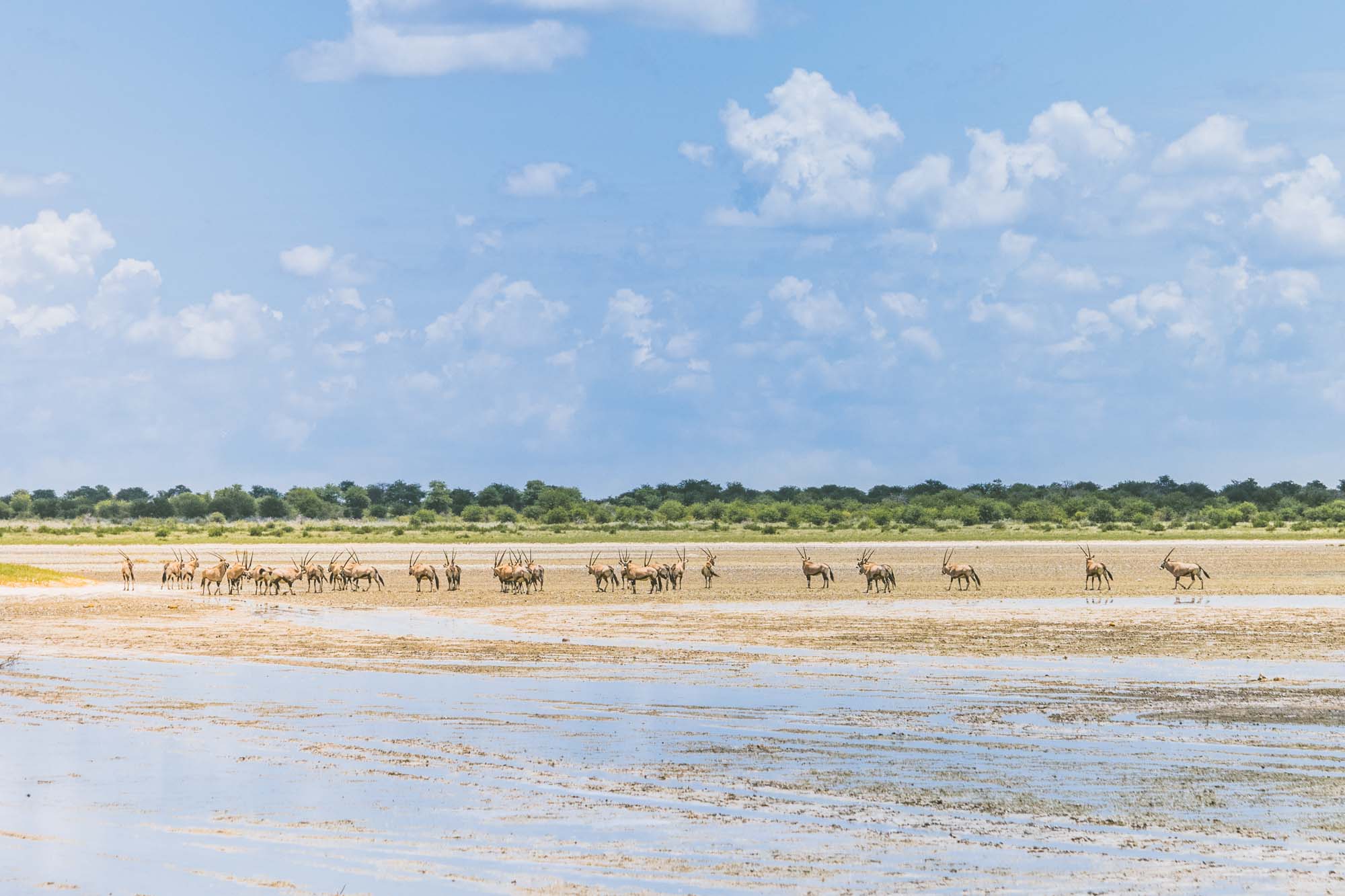 Behind the baobabs, golden grasslands grace the plains in winter. Out front, the crusted salt flats transform into a shimmering mirror of water come summer and fill with treacherous mud (don’t be tempted to drive across or you’ll surely be suckered and stuck fast). There’s limited animal activity in this section of Nxai Pan National Park, save for perhaps a chalky-coated elephant taking refuge in the scarce shadows or a lonely Oryx plodding across hardened plains. However, therein lies the appeal. 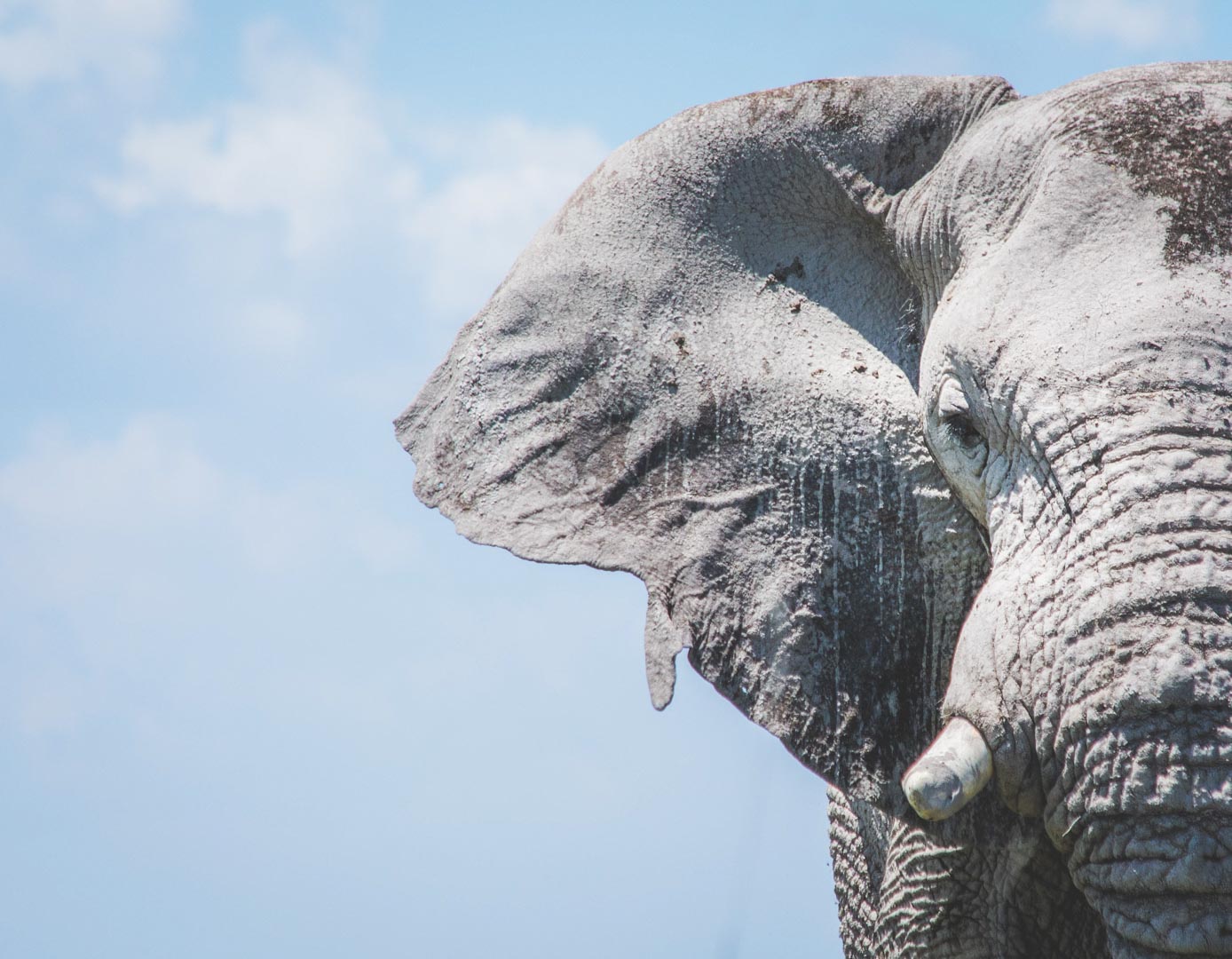 There’s nothing to do but admire the stark majesty and appreciate the magnitude of the Makgadikgadi at Baines’ Baobabs, just as travellers have done for centuries.