The movie-star qualities of Aït Benhaddou

Along a former caravan route, between the Sahara and Marrakech, there lies an ancient city that has appeared in Game of Thrones, Laurence of Arabia and Gladiator.
Written by Matthew Sterne
24 June 2021

The earthen clay city of Aït Benhaddou is one of Morocco’s most famous places, admired for its striking views and old-world beauty. A UNESCO World Heritage Site since 1987, it’s one of more than 1,000 fortified villages in Morocco and among the best preserved. It’s this combination of features that has seen it attract a considerable amount of movie directors over the past half century. 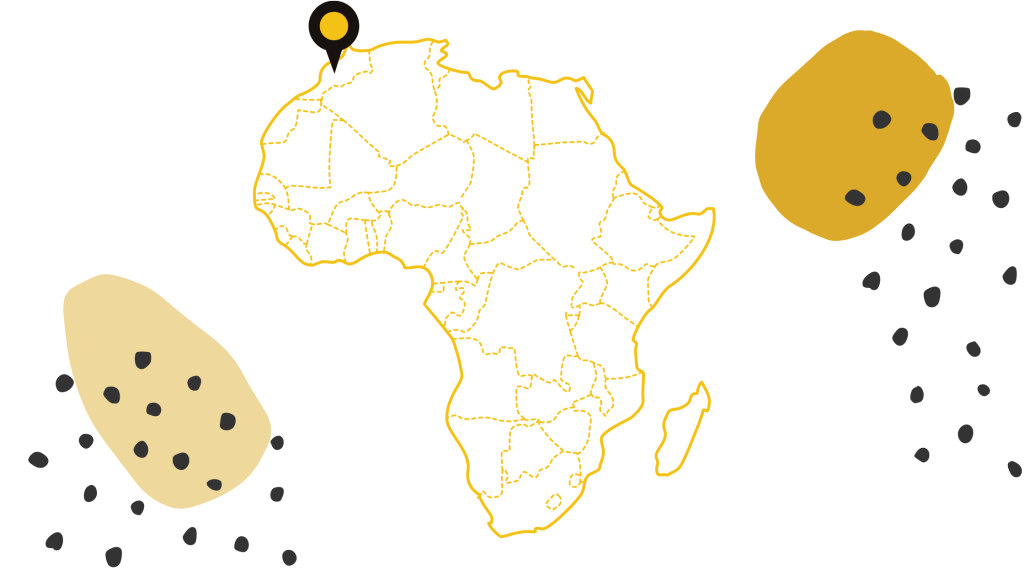 The Aït Benhaddou ksar, a collection of buildings made from the ground they sit upon and surrounded by high walls, is located in the foothills on the southern slopes of the High Atlas Mountains.

The ancient village, sometimes called “the door of the desert”, dates back to the 11th century when it was a stop on the old caravan routes. The Tizi n’Tichka pass, which was reached via Aït Benhaddou, was one of the few routes across the Atlas Mountains, crossing between Marrakech and the Dra’a Valley on the edge of the Sahara. Travellers carrying everything from salt to ivory and gold found the earthen buildings and walls a welcome sight. It offered a place of peace and respite.

While the ancient city is around a thousand years old, none of the current buildings are believed to date from before the 17th century. They were likely built with the same construction methods and designs as had been used for centuries before.

The village includes dwellings of various sizes, ranging from modest houses to tall structures with towers. Some of the buildings are decorated in their upper parts with geometric motifs. The village also has a number of public or community buildings such as a mosque, a caravanserai and a kasbah. At the top of the hill, overlooking the ksar, are the remains of a large fortified granary.

As the fortified city took beatings from the brutal rains, its citizens defected into more modern homes on the other side of the Ounila River, except for a stubborn few that remain in the ksar. While in the 1940s, more than 90 families were living there, today only five families remain inside the fortress.

The depopulation over time is a result of the valley’s loss of strategic importance in the 20th century. Most local inhabitants now live in modern dwellings in the village on the other side of the river, and make a living off agriculture and the tourist trade.

Aït Benhaddou has to be explored on foot as there are no roads. It’s a place of narrow alleys with tiny shops, steep stairways, dark passages and a few homes, where doors are still secured by carved wooden lock boxes opened with cedar keys. A guide can be helpful and can ensure entrance to a local home to sip mint tea, eat homemade almond paste-filled cookies and hear from a family about how they live, but it’s also a wonderful place to wander through aimlessly on your own.

Morocco prides itself on its Mollywood nickname, earned over the past 50 years as its popularity as a filming location has grown. Interestingly, its most-famous movie, Casablanca, wasn’t filmed here. Warner Bros. California studios gets that credit, although there’s a replica of Rick’s Café about 430 kilometres away in Casablanca that’s surprisingly good.

The heart of Mollywood is the town of Ouarzazate, about 30 kilometres from Aït Benhaddou. With its three film studios, more than 2,000 people living there are employed in the movie and TV industry, including 1,000 who work as extras. Standout movies that have been made in Aït Benhaddou over the years are;

Lawrence of Arabia
Made in 1962, Lawrence of Arabia stars Peter O’Toole, Omar Sharif, and Sir Alec Guinness. It’s the story of English officer T.E. Lawrence. The fortified village served as the location for several scenes from the famous movie.

The Jewel of the Nile
Released in 1985, the popular adventure stars Michael Douglas, Kathleen Turner and Danny DeVito. One famous scene shows the main characters attempting to escape in an F-16 Fighter Jet. Today, you can see the F-16 Fighter Jet if you tour the Atlas Corporation Studios in Ouarzazate.

The Mummy
This 1999 film stars Brendan Fraser and Rachel Weisz. Although set in Egypt, much of the filming actually took place in Morocco. Aït Benhaddou was one famous filming location, along with Erfoud, Ouarzazate and Marrakech.

Gladiator
The Ridley Scott film was released in 2000 and stars Russell Crowe and Joaquin Phoenix. Ouarzazate and Aït Benhaddou were both very important filming locations for this famous film.

Game of Thrones
As you probably know, HBO’s Game of Thrones enjoyed an incredibly popular run from 2011 to 2019. The ancient beauty of Aït Benhaddou is quite recognizable to fans of the show as the great city of Yunkai in Slavers Bay.

Aït Benhaddou can easily be included in a Moroccan bucket list journey that could also include the Sahara, Marrakech, Fes and Casablanca. Drop us a message to find out more about this land of contrasts.