People tend to call these bright white salt-scapes otherworldly, martian or moon-like but there is nowhere more African than the Makgadikgadi.
Written by Melanie van Zyl
13 January 2022

Scattered with artefacts and fossils, Botswana’s sprawling salt pans are the modern bed of an ancient super-lake that existed thousands of years ago. Attracted by the bounty of water, humans settled at its edges throughout history. Evidence of iron age settlements, stone age tools, pottery shards, plus various stone walls and cairns in places like Kubu Island strikingly similar to Great Zimbabwe Ruins all weave a story of stunning civilisation. A study of mitochondrial DNA further states that the mother of all modern humans originated in northern Botswana 200,000 years ago. This is where the first people of Africa walked and the Makgadikgadi is one captivating motherland. Quad biking only exposes the rawness of this extra, terrestrial turf. 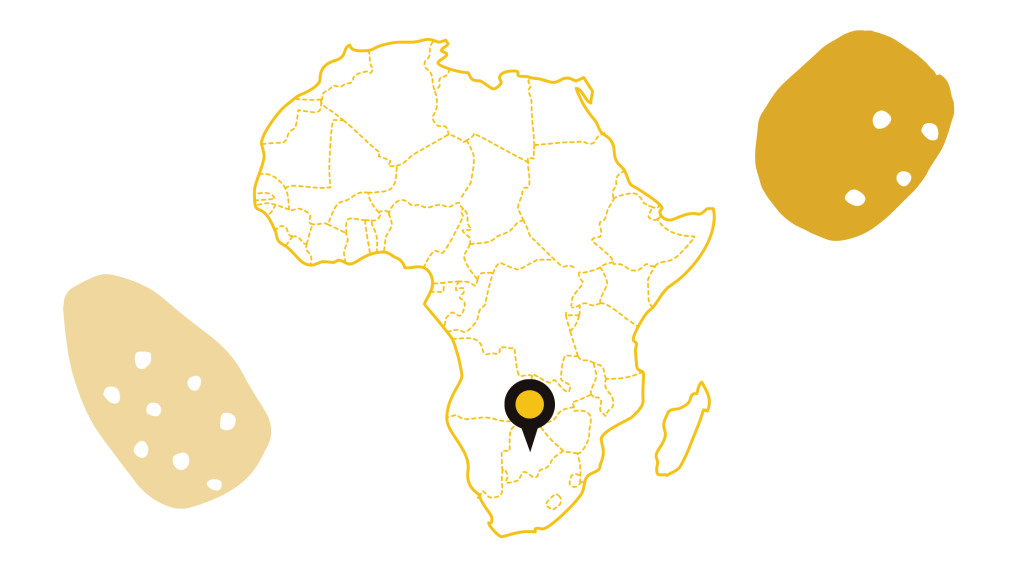 I have butterflies before we set off. An unquashable exhilaration. I had visited Kubu Island before, but in a comfy 4WD vehicle from the south, a well-trodden track that leads into the Makgadikgadi from Botswana’s diamond-mining town of Lethlakane. This would be my fourth visit but on a far more unorthodox ride.

Those butterflies turn to bees as we stand beside Jack’s Camp. A 400-kilometre journey to Kubu Island lay ahead. I nearly choke when our guide first shares this figure. Surely not. In just two nights? The unshakable buzz only settles when Super Sande wraps the cream kikoi around my head in a rite of salt-pan passage that is tender and surprisingly calming.

Super was 17 years old, when he met Jack Bousfield, who started Jack’s Camp in the Makagdikgadi back in 1962. An avid storyteller and devoted to the diversity of Botswana, he is our expert navigator through one of the most intriguing places on earth. He has wound his way through this remote realm hundreds of times.

With the cloth wrapped tightly over my hair, loose tendrils tucked into place, and sunglasses slotted over my eyes along with my leopard print cloth face mask – for dust rather than Covid-19 – there is just one final touch to complete the quad biking kit-up. Socks.

It’s dusty and crusty, trust me

Departing Jack’s Camp, we set off across Ntwetwe Pan. This ancient lakebed forms the western slice of the Makgadikgadi Pans. No one is wearing a watch and we follow Super blindly out into the bright white. Having been to Kubu Island before, I try to orientate myself at first and make sense of the directions, but I fast lose any reference to direction and time. We leave the golden grasslands behind and the space becomes all-consuming. It is a freedom.

Sleeping below a spread of stars

Leaving the hoi polloi (like I had once done) to camp at Kubu Island itself, we arrive instead at a sumptuous fly camp set up on the enchanting Lost Island of the Baobabs. Part of the Uncharted Africa concession, it is ours and ours alone.

Every comfort is catered for and we dock our bikes for high tea on a spread of kilims, cushions and bolsters dealt below the boughs of baobab trees. First, I wash my hands in warm water poured from copper jugs and smear the dust from where they had collected in the corners of my reddening eyes.

This journey is not for the faint of heart, but boy, there are rewards for the intrepid.

The baobab embrace of Kubu Island

The Ntwetwe Pan is prone to seasonal flooding and this epic trek is only possible during the dry winter months, once the lake-like pools from the summer rain disappear into the soil again. The word ‘Makgadikgadi’ is said to originate from the Setswana word go kgala, which means ‘to dry up’.

After a night tucked into cosy bedrolls, an adventure beckoned. It was time to make our way to Kubu Island.

How to visit the Island of Lost Baobabs and Kubu Island

You can sandwich in a trip to these incredible treedoms when staying at either the refreshed Jack’s Camp or the more minimal San Camp with Natural Selection and is typically a five-night expedition. You’ll spend your first two nights in camp to see what the Kalahari Desert conjures up on game drives, night drives and walks with the San.

Then, it’s time to hop aboard your quad bike and barrel across the white earth of the Makgadikgadi Pans.

Weather, luck and the lay of the land all play a role in the adventure too. Experienced hands, like our Super Sande, will sensitively guide you through the network of bogs, water pans and grasslands of Ntwetwe Pan between 1 June to 30 September each year (subject to rainfall).

A generous per cent of Natural Selection’s gross turnover goes to conservation and community projects.

You can also pair this adventure with horse rides and a visit to more baobabs at Nxai Pan National Pan. Get in touch with our expert term to curate an unbeatable Kalahari journey.

Nature's spellbinding nocturnal phenomenon. ‘The Smoke That Thunders’ is one of the few places on earth where you can see moonbow.

Magoroto Forest has been described as ‘Africa’s Bali’. So what makes this place special?

This has to be Namibia’s most romantic honeymoon pod

With its open plains, endless gravel tracks, and diverse landscapes, where better to renew your romance with the enormous outside? Take a soul-soothing trip to the sands of the Sossusvlei region.