“A sunrise on Mt. Kenya is like watching God paint.”
Written by Guest Writer
25 November 2021

My parents grew up around Mt. Kenya. Maybe that’s why it’s always fascinated me. Before the advent of colonialism and christianity, the communities who lived here saw the mountain and saw God. To them, the mountain and its ecosystem was regarded as sacred. For many, it still is. Every time we make the trip from Nairobi to visit my grandparents, it’s the first site you see in the morning, as the sun rays hit its three famous peaks Lenana (4,985m), Batian (5,199m) and Nelion (5,188m). 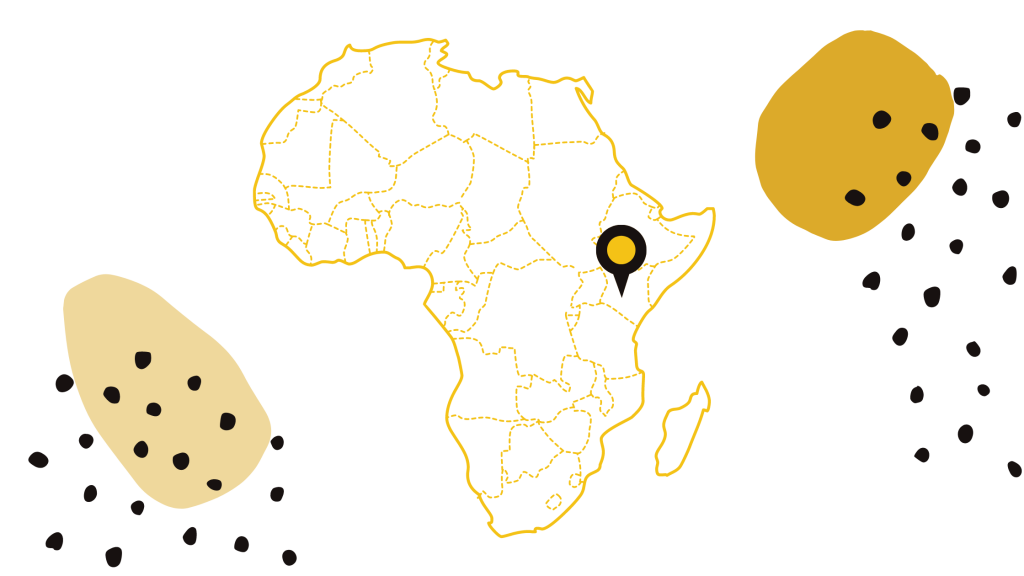 When the chance came along to explore Mt. Kenya for five days, I jumped at it. I had the chance of seeing it through my own eyes and the eyes of my guide (Jacob), the cook (Jose) and the porter (Tesh). These three people were the backbone of my explorations of Mt. Kenya.

The journey to Mt. Kenya started on an early Saturday morning in mid-September 2021 in Nairobi. Upon reaching the Chogoria Gate, we met a group of five drenched hikers who’d just emerged from the mountain. We exchanged pleasantries and they told us that the mountain had not been kind to them. Jacob turned to me and said, “The mountain speaks to each person differently.” This does not mean, however, that just because it hadn’t been kind to them we’d experience the same fate. The cook prepared lunch while the porter arranged all my belongings in the potter bag that he’d be carrying. We then entered the mountain.

Jacob, my guide, told me he’d been a guide for eight years. We walked as he told me his tales of the mountain – the good, the bad and the ugly, he’s seen it all. After about an hour of walking, we reached an area of the mountain that seemed burnt. Jacob became solemn and told me how two years before the mountain was on fire and that it had caused significant damage to the ecosystem. It was his darkest period in the eight years he’s been a guide. However, he exclaimed with joy, the mountain has almost completely healed itself.

We eventually reached our first camp of the night located on the shores of Lake Ellis. We met other guides, cooks and porters who were just as excited to see us as we are to see them. After dinner, we retired to our respective tents and tried to catch a good night’s sleep. It was cold and windy and I spent the night half-asleep and half-awake to try and cover myself with anything I could find to keep the cold at bay. My body was desperately trying to adjust to the new environment. Nonetheless, sleep came at some point and I rested like a baby to the gentle sounds of the waters of Lake Ellis lapping in the distance.

We woke early and walked to the shores of Lake Ellis. At 6am the sun rays pierced the morning Mt. Kenya sky and the rays hit the waters of the lake. Jacob joined me at the shore and informed me that we were facing the longest trek of the hike therefore and would need to leave early. He was also worried that the rain may catch up with us. We left and, with every step, the mountain opened itself up like a new chapter in a book. We eventually stopped for lunch in a cave on the edge of one of the many scenic valleys that dot Mt. Kenya. As we were having lunch, the rain started to pour but was not as bad as Jose and Tesh had expected. After lunch, we walked in a slight shower to our destination Lake Michaelson.

Lake Michaelson is located on the floor of a steep gorge and after 30 minutes of hiking, we reached the edge of the gorge. Jacob quickly summoned me to follow him to the edge of the gorge. We were surrounded by thick magnificent clouds coming out of the gorge. The plants were a shimmering yellow from the mixture of sunlight and rain hitting them. While one half of the sky was covered in clouds, the other half was blue. It looked like a scene from The Lord of the Rings. Jacob told me that it was one of the most dramatic scenes he’d ever seen on the mountain.

We proceeded to descend through the clouds and into the gorge. I was already tired and the winding road was slippery due to the rain. Towards the end of the day, we reached our camp on the shores of Lake Michaelson. I couldn’t see the lake as a thick fog had engulfed the entire gorge. Jacob told me all I needed was patience; the lake would reveal itself in due course. We set up camp for the night, took our dinner and by 7pm it was lights out, or should I say fire out?

My night at Lake Michaelson was the most difficult during the entire trek.  Strong winds kept on blowing through the night and the cold was just unbearable. At some point, I thought my tent would be blown away. At 5am I got out of my tent and just marvelled at the Milky Way. The sun rose an hour later and Lake Michaelson revealed itself. The sun rays hit the gorges that surrounded the lake, and eventually the lake itself. The sky reflected on the lake and all around sunshine poured into the gorge. I was left in awe. It was the most beautiful lake I’d ever seen in my life. I had to constantly remind myself that it was real life. After exploring the area around Lake Michaelson, we left for the Austrian Hut.

At 4,700 meters above sea level, the Austrian hut is the highest point in Kenya one can sleep. The journey to it ushered us into a true alpine climate that one wouldn’t expect so close to the equator. We started seeing some of the famous Mt. Kenya peaks such as the Williamsons Peaks and Delamare Peaks, all covered in snow. Jacob told me that depending on the season, there are times when the route is also covered in snow and hail storms are fairly common. I told him I didn’t think it would be a good time to hike. He just chuckled. According to him, any season is good for climbing Mt. Kenya.

As he said this, a slight rain with hail started falling. I went into panic mode but he assured me it was just a passing cloud. We eventually reached the most famous of all the valleys, the Gorges Valley. It’s surrounded by several of Mt. Kenya’s peaks on one side, you have the Williamson and Delamare peaks on the other Lenana, Batian and Nelion peaks. The valley also has several emerald tarns.

Standing on the edge of the valley, Jacob showed me where the Austrian Hut was – on the other side of the valley just behind Lenana Peak. We’d need to walk along the edge of the valley. Fear is all I felt. My biggest worry about hiking has always been walking along edges. This particular one was the worst I’d ever encountered. I told him that I couldn’t do it, there was no path and we weren’t mountain goats. I gave him a long list of reasons why I couldn’t do it. Eventually, he responded by showing me where our porter and cook were. They were already halfway through the trek along the valley. Secondly, he told me that it’s all in my mind. I just had to free my mind. Everyone has a reason for climbing the mountain. According to him, mine seemed to be learning how to conquer my fears and realise that I can do anything. I followed his advice, one small step after another, and we walked along the valley to the Austrian hut. We stopped from time to time and he encouraged me to just look around, be calm and enjoy the views of the gorge.

Jacob’s advice paid off and eventually, we reached the Austrian Hut. I ran around in joy like a child as I came face to face with the Lenana, Batian and Nelion peaks. They were covered in snow and, in between them, the Lewis glacier shimmered in the sun. Jacob recorded this moment of me running and jumping in joy.

The Austrian Hut is a cabin made out of wood and glass that gives one unobstructed view of the peaks. After resting for a while, we went with Jacob to explore the Lewis glacier. Beneath the glacier is a cave but we weren’t able to access it as the entrance was covered in ice. We returned to the Austrian Hut where we settled in for the night.  The full moon illuminated the night sky and the peaks glowed in its light.

We woke up at 4am, to leave by 5am, to catch the sunrise. I was filled with a rollercoaster of emotions as my dreams were about to become a reality. Tesh and Jose wished us the very best as we stepped out into the cold night and started the final ascent to Lenana Peak.

The trek to the summit was more of a delicate rock climb. The rocks were slippery due to the ice. On the rock outcrops, there was a rope that one could hold on to when climbing. I spent the entire climb holding on to the harness and Jacob’s hand. He moved with such ease and expertise, like a man who’s truly become one with the mountain.

At 5:55am, I turned to my east and found the entire skyline turned orange. On the other hand, the western side, where the Lewis glacier is, was still covered in darkness. I realised we were witnessing day and night all at once and the mountain was the great divide. We eventually climbed the final rocks. Jacob held my hand to let me up the final peak (Lenana) at 4,985 meters above sea level. It’s the third highest peak in Kenya. There is a sign at the top that shows you how high you are. There is also a Kenyan flag. The sun rose to bless the land. A sunrise on Mt. Kenya is like watching God paint. I remember Jacob’s words: the mountain speaks and the sunrise is the climax of its speech.

As we start our descent to the last camp I am full of gratitude and hope. I got to see the Mountain of God through the eyes of the ones it has completely opened up to my guide, the porter and cook. They are the true heroes of this mountain. They are the one who works behind the scenes to make sure that all those who come seeking answers in the mountain find them.

All words and photos by Tevin Mwenda (Instagram: here).

If you’d like to find out more about hiking on Mt Kenya, or any other African adventure, get in touch now.